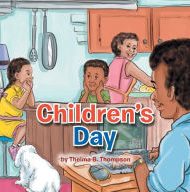 A little girl named Nellie and her brother Jamal embark on a quest to learn why there is no day dedicated to children in the sunny and largely enjoyable picture book Children’s Day.

Nellie and Jamal ask the question “Why is there no Children’s Day?” of their mother, father, county commissioner, mayor, and congressman—and no one can give them a satisfactory answer. Finally, they go to the top, the president of the United States, who soon announces:

The idea that “every day is children’s day” is not necessarily an original sentiment, but author Thelma Thompson makes it feel new and gives an impromptu guide to the hierarchy of elected representatives along the way.

Thompson delivers her story almost entirely in rhyme, and while much of it is fun, there are a few issues: Sometimes the rhyme scheme oddly falls away and the narrative lapses into prose, and occasionally rhymes are presented without line breaks. Also, rhymes strain at times, and the pattern loses some steam in the last pages:  “They welcomed the break so full of pride./Smiling and greeting the standers-by./Some found themselves cymbals, in the sun as/they marched.” These last lines seem to abandon the rhyme pattern entirely, while the punctuation contains minor errors.

The illustrations are engaging, in particular several images that include the U.S. Capitol Building and the White House as a backdrop. There is one strange choice: When the children’s father consults the computer regarding their question about Children’s Day, one might expect a search engine or informational website to appear. Instead, the laptop shows what looks to be a map or game.

While the book would be improved with more attention to consistency in rhyme and format, readers will easily forgive the flaws mentioned as they engage with the overall story.  Children’s Day is a positive, upbeat picture book that many young readers will enjoy.