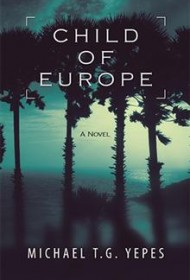 As stated by author Michael T.G. Yepes on the back cover of Child of Europe, this book aims to “pay homage” to the Jesuit missionaries who played a role in the settlement of California Antigua (Baja California) and the mid-17th century period that ensconced them.

Child is an epistolary novel, consisting predominantly of letters written by a fictitious Jesuit named Charles Galantay to his family at his childhood home in Hungary. Through these letters, we follow Galantay’s travels to Mexico and throughout Europe, as well as his thoughts, observations, and reflections on political and social themes of the time.

Yepes assumes his readers have an extensive knowledge of history. Wars that occurred in Europe before and up to the 18th century are referenced but are not delved into, and historic people are mentioned but no information is given about them. When the Jesuits are expelled from New Spain, an integral part of the story, no reasons are given for their expulsion and disenfranchisement. Without context, some intended meanings are lost and the story quickly loses steam.

The biggest challenge this novel faces, however, is a lack of animation. Throughout the book, Galantay’s letters are filled with his observations of the different locales in which he lives and the people that inhabit them, as well as his doubts, his hopes, and so on. But the descriptions are lackluster, telling without showing. Events that should inspire vivid accounts (exploring unchartered territory, surviving epidemics, being accused of subversive, criminal activities) are presented generically and blandly.

While Child of Europe presents an interesting concept for a novel about Jesuits, its fictitious narrative is neither as informative nor as engaging as readers might hope. To achieve Yeppes’ goal of creating a tribute to the original Jesuit missionaries, the novel requires a revise with an eye to improving its descriptive writing and historical context.