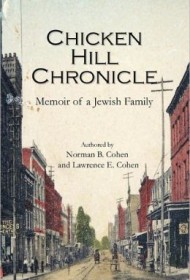 Frail at age 82, retired shoe store owner Norman B. Cohen seemed an unlikely candidate to write a memoir. Then, at a family Labor Day picnic, Norman snapped when his sister referred to their deceased father Abe, also a shoe store owner, as a “good businessman.” Angry at the apparent myth that Abe had run his business well, Norman decided to relate the story of his family and his own life growing up in the early 1900s in an impoverished section of Pottstown, Pennsylvania, called Chicken Hill. Lawrence E. Cohen, Norman’s son, encouraged Norman, serving as his sounding board and editor.

Although it’s uncertain if Norman unburdened himself of all his accumulated resentments, readers of this family saga will sense Norman’s anger about being denied a college education, feeling trapped in Pottstown as the family’s financial pillar after serving in World War II, and never realizing his potential. Norman blamed his mother for favoring his younger sisters while denying him an opportunity to attend college because she and Norman’s father needed him to run the family business.

Chicken Hill’s dramatic and mysterious opening focuses on Norman’s own children wondering why he resented his mother so deeply. After that, the memoir devolves into a mostly chronological account of Norman’s European Jewish ancestors and how they managed to carve out satisfactory lives after finding their way to small-town Pennsylvania. The section devoted primarily to Norman begins on page 191, and the book basically comes to a close in 1972, with the death of Abe, a year after the death of Norman’s tyrannical mother Yetta.

The narrative sometimes fails to transcend scrapbook-type memoir, which means that it might not interest readers who have never met or heard of the Cohen clan and other branches of the family. The book carries its attractions, however, including clear writing that provides well-researched context about immigrant Jews who settled outside more commonly chronicled urban destinations, such as New York.