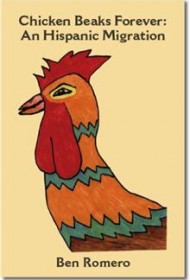 Ben Romero’s memoir compiles personal stories tracing his 1968 move with his family from Northern New Mexico, where his roots go back several generations, to San Jose, California. Little does he know the culture shock that awaits him.

At San Jose High School, 15-year-old Romero is surprised by the difference between the Spanish he’d spoken all his life and that used by his California peers. “You speak Old Fashioned Spanish,” remarks a new friend, a Mexican by birth. In class, the teacher asks Romero his nationality. “American,” he responds. Irritated, the teacher tries again: “What is your culture, then?” Romero replies, “Spanish.”

“Boo! Throw him out!” shout the other students, tossing paper wads at him. What did I say to irritate them? he wonders.

Romero, who’d grown up as part of the Spanish majority in New Mexico, is suddenly a minority. Among the throngs of Mexicans, Japanese, Chinese, Portuguese, Italians, blacks and Anglos attending his new school, “I felt very small,” he writes. “I wanted to go home.” Back in New Mexico, Romero explains, “only people who were born in Mexico called themselves `Mexican.’ Everyone else with brown skin is of Spanish descent, Indian, or both. But we’re all American first.” Early on a schoolmate cautions: “You’re in California now. If you’re smart you’ll accept the term ‘Mexican.’ Otherwise, people will think you’re trying to be better than them.”

Romero soon learns the racial subtleties of his new community, blending in by using the local dialect. His acclimation is helped by the influx of New Mexican relatives and friends pursuing better job opportunities.

Romero’s book brings to mind Sherman Alexie’s stories of growing up on the reservation, but without Alexie’s sense of irony. Occasionally humorous but more often plainspoken, Chicken Beaks Forever (refers to a family joke about pistachios) will appeal to readers with a strong connection to the American Southwest and to anyone who has experienced migration firsthand.