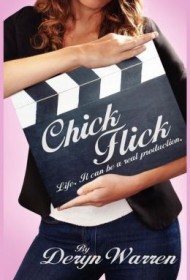 Deryn Warren’s Chick Flick is a witty novel about one woman’s revenge on her cheating husband.

Sara is a stay-at-home mother who just had her fourth child. She has given up a promising directing career in order to care for her children, but she’s never regretted that decision for a second. That is, until she learns that her beloved husband, Joe, is having an affair.

Sara is blindsided by this news and scrambles to cope. With the help of her close friends, Sara hatches a plan to bring her husband—and his new lady love—crashing down.

Sara is an immediately sympathetic character. Women will ache for her as her no-good husband leaves her with their four children. It’s a difficult situation, and for the first part of the novel, Sara is stymied by her despair. Her lack of action and apparent acceptance of the situation is almost painful to read about, as she feels as though she has no leverage to keep Joe with his family. But Sara eventually finds the fire within herself and taps into that anger, which brings endless amusement to the novel. It’s a difficult situation, to be sure, but Sara is a well-developed character that readers will enjoy getting to know.

Warren writes her novel with a sure hand and an easy conversational style, and as a result, Chick Flick is a pleasure to read. The plot veers into the unrealistic at times (such as Joe’s confession about how he felt the first time he slept with his lover), and Joe is the caricature of a bad, cheating husband, but all-in-all, the novel is a fun romp that fans of women’s fiction and chick lit will enjoy from beginning to end.