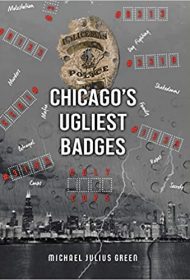 Chicago’s Ugliest Badges by Michael Julius Green is the fictional account of seven Chicago cops accused of working for the Mafia. Against the backdrop of their impending trial for charges including racketeering, rape and pedophilia, the defendants ruminate on choices they made that landed them on the wrong side of the law.

While working undercover, officer John Cicerone is enlisted by the Mafia to assemble a crew of corrupt cops to tip them off to drug busts and protect their turf from encroaching gangs in exchange for drugs and money. Cicerone enlists six morally bankrupt coworkers. Caught up in a world of greed and power, they spin out of control, victimizing those they were charged with protecting.

While mob stories can be gripping, glaring flaws in this story are apparent from the start. Changing tenses, few transitions and lack of structure (including no page numbers or chapters) make navigating the shaky storyline difficult.

The dialogue is particularly problematic, especially that of officer Eddie Bower. Seemingly aiming for a stereotypical Chicago “wise-guy” dialect (e.g., “fahgettaboudit,” “yous guys”), Green adds an ”s” to almost all of Eddie’s words, which, added to malapropisms, renders him virtually unintelligible at times (for example: “He’s mores susceptible twos turning us in then beings a part ofs what wheeze have going”).

Heavy on Mafia tropes and short on substance, important details are ignored, including how the group eventually was discovered and apprehended. The subsequent trial does little to advance the plot, serving mainly as a vehicle for lawyers to spout pseudo-legalese gibberish.

The meat of the story is the crimes the seven committed, told from each man’s perspective as they wax nostalgic about their glory days while awaiting trial in their jail cells. Rape is heavily featured, with graphic depictions of acts so horrific that “gratuitous” seems too polite a word.

Featuring a flimsy premise, despicable characters and a preposterous ending, Chicago’s Ugliest Badges is unlikely to appeal to readers.