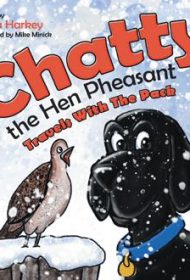 A hunting dog meets a pheasant who doesn’t want to be caught in the humorous children’s picture book Chatty the Hen Pheasant Travels with the Pack.

Nassau is a Labrador Retriever on a pheasant hunting trip in South Dakota with his owner, whom he calls “The Great One.” Amidst a blizzard, Nassau gets separated from The Great One, but decides that even alone, he will find a pheasant for his master.

When he captures a pheasant named Chatty in his mouth, she tries to convince him to let her go, using threats, demands, insults, and complaints. Like a good hunting dog, Nassau resists the urge. Following The Great One’s whistle, he brings the pheasant to his master. But The Great One notices that Chatty is a hen pheasant, and thus off limits to preserve the overall pheasant population. He releases Chatty, who flies off as Nassau heads home with his owner.

Nassau narrates the story, making dog-centric observations: for example, as the blizzard worsens, the snow falls “like white dog blankets, thicker and thicker,” while the pheasant’s fragrance reminds Nassau of the smell of the chicken nuggets his owners feed him.

The story’s highlight is when Chatty, struggling in Nassau’s mouth, talks to the dog, asking his name and encouraging him to open his mouth to answer. While this short section is entertaining, it’s unclear whether Chatty is purposely baiting Nassau to escape, or just naturally a non-stop gabber. Contrary to her name, Chatty has little to say the rest of the book, which ends abruptly.

The illustrations are warm, generally expressive, and humorous, as seen in Chatty’s irritated look as she’s carried away and Nassau’s pride, confusion, and acceptance as he brings the pheasant back, only to see her released.

Young children uninitiated to the idea of hunting might be disturbed by the premise of a bird in danger, but those in hunting families should find this a pleasant book, despite its rushed conclusion.