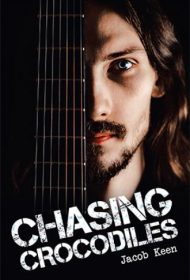 When a group of New Zealand high schoolers form a band and find success, it changes their lives—and not always for the better—in Jacob Keen’s novel Chasing Crocodiles.

The son of a music teacher, David Flanagan was a natural musician from a young age. When approached by several others in high school and asked to join their band, David agrees, despite having heard the others were awful musicians.

Giving the band a name, “Screaming Ugly,” and rechristening David as simply “Flanagan,” the group practices, appeals to Flanagan’s Uncle Bob for help with their stage presence and are soon winning over crowds. Still only teens, they leave their homes and hit the road. The early years are a struggle, but eventually, they’re successful beyond their wildest dreams, touring the world. But while good times ensue, so do the bad, including addiction, theft, betrayal and a deadly accident.

Keen skillfully describes the darkness of addiction, such as when Flanagan gets a look at himself in the bathroom mirror: “…he was relieved his tattoos hid the track marks and the abscesses that had finally started to heal…His health had really gone to shit and Flanagan knew that he was probably dying, but he just couldn’t see how to escape it.” Flanagan “thought of ending it all on a regular basis now.”

Unfortunately, too often the author relies on telling what happened rather than creating a fully rendered scene. When Flanagan seeks to get clean, for example, readers learn nothing of how difficult it is or his specific trials, only that after two weeks he is “weak.” As a result, events can seem too neatly tied up.

There are also distracting editing problems, including missing or wrong words (“emancipated” for “emaciated; “brought” for “bought”; “thought” for “though,” etc.), incorrect punctuation and overuse of ellipses.

Those who can overlook such issues will find a compelling plot, one that might appeal to readers interested in the music world.