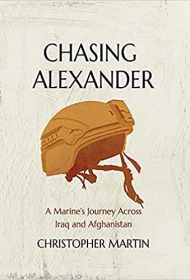 Christopher Martin’s memoir, Chasing Alexander, is a young Marine’s journey of self-discovery and redemption in the battlefields of Iraq and Afghanistan. It takes readers from his surprising decision at 19 to enlist in the Marines and carries them through brutal basic training to the front lines of war.

Martin was a smart, fat kid in grade school, but in high school he lost weight and his interest in academics; being a beer-drinking badass was more fun. His college-educated family feared he wouldn’t get into college. He did, but bored with classes, he spent his time reading military history and dreaming of becoming a hero, like Alexander the Great.

With Mideast conflicts raging in the mid-2000s, Martin realized he could test himself in the crucible of war. He joined the Marines in 2007, insisting on assignment to the infantry, despite high test scores that could have landed him a more prestigious role. He wanted to be in the thick of things, as had Alexander. Throughout the book, he traces Alexander’s journey, traveling the same territory.

Martin struggled through basic training, refusing to quit and becoming a leader. From his first firefight to his last, he doesn’t downplay his terror or minimize the hardships. Readers join Martin through long nights of guard duty and feel his terror as he runs unprotected through a storm of Taliban bullets. His writing is simple and powerful: We smell sweat, hear Marines screaming and feel Martin’s heart thundering with fear.

Martin’s story is honest and revealing, helping readers understand why their enlisted loved ones seek danger and providing an unvarnished picture of a soldier’s life. At book’s end, he writes of his four years’ service: “Everything I had hoped to do … I had done. I had … stood in the fire and held my head high. I had made my tiny splash in the tides of history.” An aimless boy had become an accomplished man.