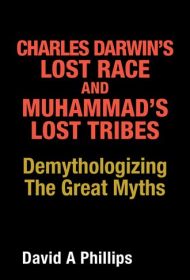 “This book is an alert to all people of what happens when you turn God into a myth.” So writes David A. Phillips in this damning diatribe attacking modern materialist culture and the traditions and beliefs in the centuries-old religion Islam.

Writing from a conservative Christian viewpoint, the author argues that atheists, liberals, and progressives are unraveling the fabric of modern society by celebrating LGBTQ stances that look to redefine marriage and gender and undermine education and traditional values of family and natural law. His criticisms are harsh: Labeling the gay and “LGBT” movements a “crisis,” he writes: “Children’s lives are being sacrificed as pawns on the altar of homosexual marriage, by adoptions and its forced imposition onto junior school curricula, to normalize it in their vulnerable minds!”

The author traces these recent societal changes to Darwin, whose scientific studies on evolution laid the groundwork for the West’s rejection of God. For Phillips, when the Supreme Being is defeated through rationalism, the world spirals into relativism and society falls apart.

Yet Phillips also sees 1,400-year-old Muslim beliefs as another threat to Western civilization, especially Christianity, citing recent “gross acts of barbarism” on Christians across the globe.

The author’s prose is clear, his arguments linear and pointed. Most notable is Phillips’ insights on Erasmus Darwin, Charles’s grandfather, whom he believes was the intellectual stimulus behind Darwin’s writings. The author also discusses George Fox, founder of the Quaker movement, who, while a man of great intellect, still had faith in God.

Phillips’ strong stances against materialism, Islam, and the LGBTQ community will draw the ire of many. Early in the book, he laments that he couldn’t get his book published in the U.K. and praises the U.S. for its freedom of speech and the chance to see his book in print. Many readers might not share his joy that this book has seen the light of day, but those of like mind will find much to discuss in these pages.