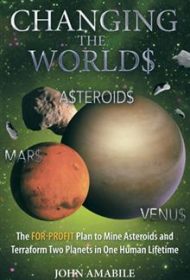 In Changing the Worlds, John Amabile outlines a plan for mining asteroids and terraforming Mars and Venus.

As a first step, the author proposes rescinding the Outer Space Treaty of 1967, which was signed by many nations and designated space as “the collective possession of mankind,” as well as prohibited the placement of weapons of mass destruction in space or on any celestial body. In its place, he would create a space corporation with the power to sell asteroids and planets. Only entities from democratic nations, he stipulates, would be allowed to participate in the corporation.

The corporation would be run by businessmen who could realize profits from the sale of metals derived from the asteroids and from real estate ventures on the planets. In making his case for the feasibility of extraterrestrial businesses, Amabile covers everything from the repurposing of cold war missals to the use of blue-green algae to create a hospitable atmosphere on the terraformed planets.

The author devotes much of his book to the technicalities necessary to support work and life in space and on other planets.  Engineers and readers with scientific leanings may find his ideas concerning Helmholtz Coils (“used to neutralize electromagnetic radiation coming from the sun”), space stations, mining equipment, and solar reflectors, etc., interesting. They may find other ideas less plausible, such as his proposal to use atomic devices to excavate “thousands of cubic kilometers of ice” from Ceres for use in terraforming Venus and Mars.  Although the idea of radioactive water on a terraformed habitat doesn’t disturb Amabile, it may give others pause.

Most readers would also question how business in space could be limited to people from democratic countries. Surely players like China, North Korea and Iran would have some objection to this concept.

Although Amabile presents a creative approach to doing business in space that is interesting to consider, he would need to work out more details for the book to reach its fullest potential.