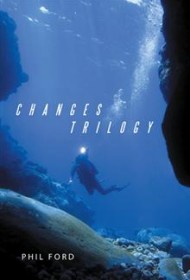 In the first segment, “Changes,” we meet Alex McPherson, a marine biologist who sounds a little too perfect. “What’s he like?” asks his wife, Angela. “Well, he’s six one, the most stoic hazel eyes, with salt-and-pepper hair where a solid deep brown used to be. He played college ball, has a black belt in jiu-jitsu from before we met, and still keeps in great shape. Yeah, great!”

While diving in the Grand Caymans, Alex is trapped by a school of hammerhead sharks and sacrifices himself to save Angela. He is saved by beings that only identify themselves as “a different species.” These unknowns hack Alex’s DNA so that he has the ability to dive to any depth while his body is also denser and resistant to damage — a sort of “Man from Atlantis” — and he’s also telepathic. He then becomes a kind of freelance superhero for the U.S. Navy, which uses him to investigate and rescue deep-dive accidents.

The second story, “Relativity,” takes an entirely different direction. A mad scientist in an Arizona laboratory creates a singularity in time and space, but the rift also erases Angela from existence, forcing Alex to fight to set things right.

The last story, “Ice,” is a straight-up men’s adventure a la Clive Cussler. A nasty brute named Helio Peregrine, “The Skipper,” kidnaps Angela to force Alex to retrieve some stolen diamonds from a watery grave in Alaska.

Even given the suspension of disbelief to allow for the book’s paranormal elements, the scenarios are difficult to buy into and the characters wafer-thin. The author’s closest mainstream analog would probably be Australian thriller writer Matthew Reilly, whose novels share Ford’s enthusiasm for impossible physics, over-the-top action, and underdeveloped characters.

In short, it’s a comic book. While that style might appeal to some, this offering lacks the cleverness to keep readers engaged throughout.