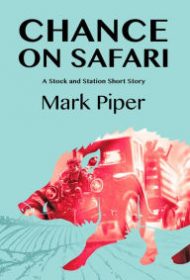 This first entry in Mark Piper’s Stock and Station serial introduces Chance, a 13-year-old boy growing up in Central Australia in the 1930s.

To weather the Depression, Chance’s guardians have converted their struggling sheep farm into a game park. Ironwood Station offers a “safari” experience to those still wealthy enough to afford it, and Chance is overjoyed when the park’s tour guides ask him to act as a “runner” on a boar hunt – going ahead of the party’s truck to scout for game. But when Chance sees the quarry with its young and has a change of heart, he finds himself in harm’s way.

In an author’s note, Piper writes that he has based the Stock and Station stories on his grandfather’s experiences. This proximity to the way of life he describes greatly enhances the story. His use of details, such as the feel of lanolin oil used for shearing sheep or the seating arrangements in the staff cafeteria, bring the world of Ironwood Station to life.

As befits the first installment of a serial, Piper provides only introductory character sketches. These are intriguing enough, however, to keep readers looking forward to getting to know these people better in the next installment.

On the other hand, some dangling modifiers and unnecessary sentence fragments, mostly toward the beginning, prove a bit distracting. Also, characters are sometimes introduced abruptly, leaving their precise roles on the ranch unclear for a while.

Despite these minor flaws, Chance on Safari has potential to appeal to readers of various ages. The eventful plot and Grange Wallis’ lively black-and-white illustrations should draw in early or middle readers. And the historical details and colorful supporting characters add interest for nostalgic adults interested in a past way of life and a revival of the adventure serial.