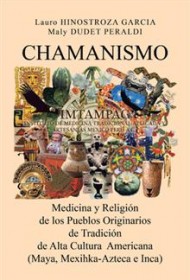 In Shamanism, practitioners reach an altered state of consciousness in order to interact with the spirit world and channel these energies into this world. In this well-executed and fascinating book, co-authored by Lauro Hinostroza García, the founder of the Institute of Applied Traditional Medicines in Mexico and Peru, and Maly Dudet Peraldi, a linguistics professor at the National Autonomous University of Mexico (UNAM), readers will find an overview of Shamanism in the Americas. Though the authors mention some of the lesser-known native groups of the Americas (and also, briefly, Indian ayurvedic treatments and Chinese acupuncture), they refer mainly to the Aztecs, Mayas and Incas, due to their advanced civilizations as well as their relationship with nature.

Overall, Shamanism focuses on how practitioners, who closely observe nature, cure through different means, including: praying, speaking, touching, listening, observing, chanting, dancing, using herbs and, very respectfully, entheogen plants. Shamans, who are the intermediaries between the divine forces and humans, believe that the body and mind sicken due to a bad relationship with nature. If there is an imbalance, then the universe and everything in it becomes ill.

Divided into six chapters, the book goes into great detail, explaining how plants and herbs such as ayahuasca, peyote, coca leaves, and mushrooms, among other natural substances, are used by shamans to cure diseases of the body and the mind. In addition to healing practices, the book looks at the roles of women in Shamanism and includes interesting historic tidbits on alternative medicines, such as the fact that the Inquisition’s torturers used toloache, a potent alkaloid with anesthetic and hallucinogenic properties, to make their prisoners speak.

Although there are slight quibbles with spelling and punctuation errors that an editor can easily fix before the book is republished, Shamanism will be of great interest to readers who want to learn more about traditional ways of healing in Latin America.