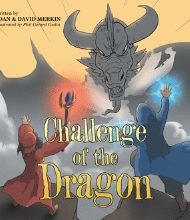 Two siblings pursue a quest to defeat a dragon and save their homeland in the children’s picture book Challenge of the Dragon.

Prince Valerian and Princess Alisia, inheritors of magical abilities from their deceased mother, are charged with saving their father’s kingdom from a mysterious black cloud that seems to be slowly killing the land. They set off for Darkoria, the realm of the evil dragon Terresca, using their magic to light the way and protect themselves from the malevolent local inhabitants. They soon meet the wizard Mordimar, one-time tutor of Terresca, now held prisoner by the dragon. He directs them to the dragon’s lair, and they fight a vicious final battle with Terresca, calling on all their powers to defeat him.

Challenge of the Dragon contains many of the elements fantasy readers enjoy: dragons, wizards, magic, goblins, trolls, and riddles. The illustrations, although sparse, are skillfully executed.

However, the book suffers from several drawbacks. Some story elements seem derivative. For example, the twins’ tiger is named Shirekan, very similar to Shere Khan from The Jungle Book. Additionally, although mostly straightforward, the writing can be difficult to follow in places, as with a confusing flashback near the beginning of the book. After just three pages establishing the story, setting, and characters, readers are asked to “shift gears” for a lengthy encapsulation of Terresca’s history, before returning to the main story.

There are also problems with the copy, as several words have strikethrough marks that didn’t get caught before publication, while an unidentifiable punctuation mark—a combination of a dash and a comma—is seen throughout. Finally, most of the pages are dense with text and have no illustrations, making the reading task daunting for a young audience and the style more appropriate for a chapter book.

While some children might appreciate the story if read aloud to them, revision for clarity and suitability of format would greatly enhance this offering.