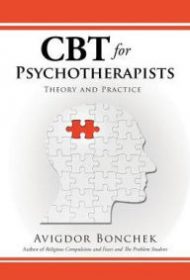 A university professor and clinical psychologist with more than 50 years’ experience, Avigdor Bonchek is more than qualified to teach other professionals about one of his favorite methods: cognitive behavioral therapy. In CBT for Psychotherapists: Theory and Practice, he makes a strong case for his method of choice.

Despite its brevity—running just over 100 pages—this little book covers a lot of ground. Bonchek thoroughly explains what CBT is, how it works, how to use it, and its benefits in treating everything from phobias, panic attacks and migraines to obsessive compulsive disorder. Also included are sample questionnaires given to patients with various conditions, as well as brief therapeutic conversations that lead them to positive conclusions and, hopefully, sustained relief from their problems.

But it’s the wealth of real-life examples, culled from the author’s and others’ practices, that are especially helpful. Bonchek encourages therapists to “think outside the box” with unorthodox methods that, on the surface, appear to be counter-intuitive. “Thinking creatively,” he says, “is what makes our profession so challenging and so gratifying.”

Take, for example, the teacher who used a methodical CBT approach with a 16-year-old student who repeatedly cursed in class. Ignoring his vulgarity, she consistently rewarded his positive behavior until his disruptive antics stopped. Then there are the parents of a daughter with bulimia who, after exhausting their attempts to cure her, followed her psychologist’s advice and encouraged her to eat all she wanted and throw it up afterward. Eventually, the girl became appalled by her own eating disorder and ceased her former, life-threatening habits.

The book suffers from inconsistent use of bold headings that makes skimming difficult, and although written for new and experienced therapists and students alike, its no-frills style provides more of an introduction than in-depth study. Nonetheless, this is an informative read that would also be appropriate for lay readers interested in CBT.