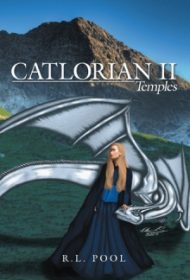 In this sequel to Catlorian: Savon’el, a diverse group of species unites to save captured innocents and recover precious artifacts. With themes of racism, revenge, loyalty, and honor, this fantasy novel follows their long and dangerous journey.

Set in the year 1832 ER (Empire Reckoning) in a land called Catlorian, the united warriors include a knight, a shapeshifter, a halfling, a dwarf, an elf, a giant, and a human. The group is led by Lilith, a sorceress fighting for justice on the side of good, despite her disreputable Daku heritage, a group that consists of supernatural beings who use their power for all the wrong reasons.

In their pursuit of Lord Banshe’e, the corrupt ruler who took over villages and forced victims to work in the mines within his temple, the group encounters an assortment of magical beings and vicious opponents. Gory violence, including killings, rape, and death threats, appear throughout (although, happily, never at the expense of character or plot development).

The overall story includes interesting themes of good versus evil, with subplots portraying individual struggles for change. For instance, racism is explored through the elf and dwarf, who don’t like each other because of long-held prejudices, and initially team members distrust Lilith because of her race, despite assurances she’s on their side. In addition to plenty of original material, fantasy lovers may recognize elements similar to those from Star Wars, The Lord of the Rings trilogy, and Indiana Jones and the Temple of Doom.

The prose could use some light editing for punctuation, capitalization, and anachronistic expressions, such as this passage containing all three errors: “‘True that.’ stated the beggar mage as he took the stones from the lich and looked toward the silver pentagram.”

The ending concludes most of the story but leaves enough ambiguity for a third installment. Readers who enjoy bloody battles against enemies and battles of wits against frenemies may enjoy this magical journey.