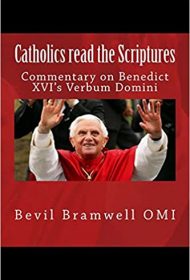 One of Benedict’s lesser-known but essential works, Verbum Domini focuses on the Catholic Church’s relationship with the Bible and how Christians can learn to communicate better with God and God’s creation. The church document also calls on Christians to avoid extreme biblical interpretation, while encouraging the people of the world to allow for religious tolerance and peaceful expression of faith.

Pope Benedict’s exhortation is divided into 124 articles. Bramwell examines each of these points while reemphasizing the Pope’s call for believers to focus first on the Word of God (Jesus) and then the word of God (Scripture). As the author explains, “everything is created through the Divine Word (John 1:3), and everything has been redeemed through the Divine Word that became incarnate (John 1:3, 4).”

Bramwell stresses the importance of revelation, which is one of the ways that God communicates with his people. He also explores “hermeneutics,” or interpretation of the scripture and wisdom text, helping to elucidate Benedict’s belief that priests often stray in their homilies by shifting their teaching away from the Bible and focusing more on their personal experiences. Further, Bramwell reinforces Benedict’s call for all people to read the Bible more prayerfully and frequently so that Christians can realize that they live in “the stream of the life of the Savior.“

Well-researched and expertly footnoted, Bramwell’s book is erudite, helpful, and impressive. He takes a dense document, unfolds its complexity, and keeps his explanations succinct and focused. Nonetheless, it’s important to note that the Pope’s exhortation and the author’s commentary are not written for casual readers. They are best suited to academics, graduate students, and armchair theologians, who will find much to ponder and explore in these pages and share with others.