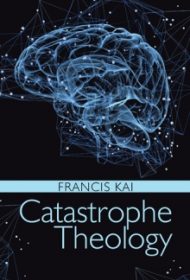 Suffering draws some away from religion, others closer. For Frank Kai, it was the latter. In Catastrophe Theology, he tells about his life and its hardships while also exploring doctrinal differences between Christian denominations as he relates his spiritual journey from Catholic to Orthodox to Lutheran.

While Kai provides glimpses of his early life, including his marriage to his beloved Martha and the birth of their autistic son, Benoit, Catastrophe Theology focuses primarily on the last decade of the author’s life. During this time, Kai was diagnosed with liver cancer and his wife developed brain cancer, not only putting their lives in jeopardy but also meaning uncertainty for their son.

Despite these disappointments, Kai never loses faith in God, though he certainly questions the actions and dogma of the Catholic and Orthodox traditions, especially in their teachings on suffering. During this proverbial exile to what the author calls the “Valley of Achor” (a biblical reference to calamity), Kai starts studying the writings of Martin Luther and realizes that “We must submit totally to God, let Him lead our lives instead of choosing to live life by our free will.” He eventually identifies with Luther’s idea that suffering is a form of spiritual pruning that God uses to make his creation stronger.

At more than 500 pages, Catastrophe Theology often feels overly long and the mix of memoir and theological examination can make it seem like two different books (his section on Trinitarian Doctrine could be its own volume). Still, Kai’s simple prose, harrowing story and personal charm make for easy reading, and readers will feel sympathetic to his family’s misfortune (the story of his autistic son running away on the day of Kai’s surgery deftly pulls at the emotions) and appreciate the fact that throughout the personal devastation, Kai never gives up on God.

While some re-thinking of the book’s structure would enhance its effectiveness, Christian readers will find the author’s tenacity reaffirming and inspiring.