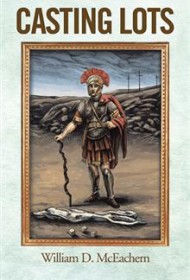 Casting Lots is a swords-and-sandals epic with a spiritual twist. The story combines an affecting adventure that spans ancient Rome and Greece and covers a crucial moment in Christian history.

In 54 AD, Lucinius, a Greek enslaved by Romans, is ordered by his master to seek out the Roman centurion, Cornelius, who was present at Christ’s crucifixion. The master wants the story of the “wonder worker,” and threatens Lucinius with his life if he fails to come back with the information. Cornelius agrees to talk to Lucinius and pays Lucinius’s master to take the slave along on a voyage over land and sea. During this adventure, he tells many stories, but not the one Lucinius most wants to hear. They struggle over the matter, and Cornelius ultimately relents.

The novel is told in short chapters; each interweaves details of the pair’s travels with Cornelius’s narratives of ancient Rome and his eventual employment with Pontius Pilate.

Author William McEachern repeats himself when it comes to Lucinius’s joy in travel contrasted with the knowledge that he’s not free, but such passages offer us a sense of his character (such as when Cornelius tells Lucinius a story about 8,000 murdered slaves, and Lucinius thinks, “Romans seemed to be obsessed with slaves, and being one, I was not particularly interested in the subject unless it dealt with freeing slaves, in general, or freeing me, in particular”). The colloquial style makes the story easy to follow, while the setting descriptions keep it grounded in its historical period.

The story’s end reveals that both Cornelius and Lucinius played significant roles in biblical history; one of these revelations comes as a surprise that places the book in a new light, and it’s quite artfully done. Casting Lots has much to recommend it to fans of ancient historical fiction, and the message of faith at its heart is a pleasing bonus.