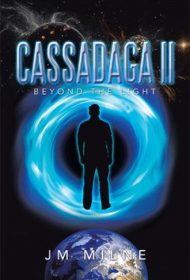 The sequel to Cassadaga: Breathers (2019) continues JM Milne’s saga involving “reluctant psychic” Bret Wolf as he becomes entangled in an interdimensional battle with a dark entity that has stretched its reach into the corporeal world and is using its power to harvest souls.

With his wife Jill pregnant and his eight-year-old daughter Bethany (who may be the reincarnated spirit of his mother) growing older and wiser by the second, former helicopter pilot Wolf’s life in Central Florida is full of promise. But during a hypnotic regression session with friend and “resident psychic medium” Dr. Leagen, Wolf finds himself in a place he calls the “drift”—a portal of sorts to different dimensions—where he senses a deep wrongness that is somehow connected to himself and the area around the small Florida community of Cassadaga, which some call the “spiritual capital of the world.”

Enlisting some of his friends and family to help with his subsequent investigation—including FBI agent Cherokee James—Wolf finds connections between the growing darkness, a missing female grad student from UTEP, and a criminal enterprise that traffics undocumented immigrants across the border.

The obvious hook here is the author’s utilization of New Age elements—past life regression, astral projection, reincarnation, etc.—but the novel features other noteworthy elements as well: strong character development (particularly the dynamism between Bethany and Wolf, whose complex relationship has great potential for future installments); breakneck pacing throughout, and the subtle use of science fiction and fantasy elements. These qualities undeniably strengthen the narrative and differentiate it from other comparable stories.

The plot does, however, get unnecessarily muddled in a few places: The subplot involving artifacts is never clearly explained and negatively impacts clarity and narrative momentum in places.

Overall, however, Cassadaga II: Beyond the Light is an engrossing New Age thriller that readers of the genre will find engaging.