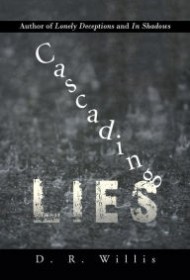 Cascading Lies, the third volume in D.R. Willis’s Nick Davis trilogy (after Lonely Deceptions and In Shadows), is a well-paced thriller built on unfolding family secrets.

Readers unfamiliar with the first two novels may be confused about characters’ motivations and backstories, which can be sketchy here. In outline: After his father’s death, Nick, a mechanic, plans to trade New Jersey for Oak Bluffs, Georgia. Just before he goes, his sister Amy and an accomplice break in and drug him, looking for anything important Amy and Nick’s father might have left him (the origins of the siblings’ rift isn’t explained). Meanwhile, Nick’s former lover Margaret has fled, too, and she’s taking instructions from Cascade Systems, a shady corporation that Nick’s late mother, Teresa, was involved with.

As Amy and Margaret, among others from his past, zero in on Nick’s new location, he tries to resume normal life, even striking up a romance with Jane, a widow with a traumatic incident in her past.

For a short book, Cascading Lies is packed with plot turns that gradually reveal the full extent of Cascade Systems’ activities—to which the title makes clever reference. The chapter that flashes back to Jane’s bereavement contains some of the book’s best storytelling, whereas earlier italicized sections featuring her nightmares are confusing.

Those who haven’t read the first two titles will inevitably wonder about some plot intricacies, especially the relevancy of the prologue set in 1945, featuring Roth Braun. Perhaps a short recap of the previous books could be included as a preface. Moreover, the sudden ending doesn’t seem to provide appropriate closure for the final book of a trilogy; this might suggest that Willis is considering a follow-up series.

Those new to the series would be well-advised to start with the other two books first.
Returning readers, however, will find a fast-paced tale that furthers the Nick Davis storyline in an entertaining way.