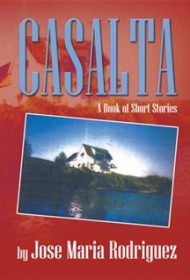 The amusing opening story, “Plot Through the Picture Window,” has an angry Herb returning home from work to find that his trash wasn’t taken because the van belonging to a man painting next door has blocked the cans’ view from the trash collector. Herb plots a way to get back at the painter, only to have the tables turned on him.

In “Fecal Fowl,” another strong story, a man plans the demise of his family’s beloved parakeet. The reader knows right where the protagonist stands from the opening line —”I hate that parakeet” — and learns how the two have sparred as the story unfolds. Another piece follows a deceased used car dealer to a fork on the Pearly Road where a higher power will determine his rightful place in the hereafter. Rodriguez also writes about a boy on an adventure, an odd solution to a car problem, and jealousy arising after two widowers meet on a blind date.

Each story is enhanced through rich, rhythmic and vivid descriptions. For example, here’s how Rodriguez describes the moves of awkward young Teo in “Journey with a Donkey”: “With his hands speared in his pockets, his head recessed between his lanky shoulders and driven deep into the wrinkled collar of his faded blue shirt, Teo dragged his feet toward the back lot shack.”

Well-drawn settings and clear conflicts and resolutions drive several of the stories. However, a few are less successful at making their point because they read more like creative writing exercises and lack clear, relevant climaxes. Despite that, each story maintains some entertainment value — at times amusing, other times thought-provoking.

Overall, this collection proves imaginative and fun to read, largely because the author is a master of description and has developed strong, believable characters. It should please a wide audience.