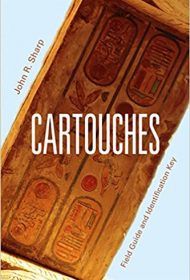 John R. Sharp’s casual, chatty style and contagious appreciation for hieroglyphs —“perfectly proportioned, highly detailed miniature works of art” — makes his field guide enticing to read cover to cover, rather than consulted only occasionally, as with most guides.

Cartouches, Sharp explains, are the names of ancient Egyptian royalty “inscribed in oval frames on… stone.” The inscriptions are written in hieroglyphs, the ancient Egyptian writing system composed of script and “pictorial representation.” Sharp has constructed his book so that visitors to ancient sites and museums can find the cartouches and obtain the “immediate satisfaction” of beginning to understand this system.

The book covers royal cartouches from approximately 2544 BC through the Roman emperors, ending around 305 AD. Cartouches are arranged chronologically by dynasty, and Sharp generally uses his own prodigious collection of photographs to illustrate the names of rulers. As the cartouches proceed in history, so do readers’ knowledge of the logograms and phonetic symbols that compose their names.

Of the five names for the Egyptian kings (called the Five-Fold Titulary: Horus Name, Two Ladies, Horus of Gold, Birth Name, Throne Name), the author addresses only the ruler’s birth and throne names. The other categories, Sharp indicates, are beyond his book’s scope.

The book’s second part comprises a cartouche identification key that will enable anyone, he claims, to “quickly identify almost any cartouche.” Appendices — lists of hieroglyphs and royal names; a glossary; index; and annotated bibliography—are also provided.

Much of the book’s charm lies with the hieroglyphs, which depict everything from a desert hare to a whimsical pot with walking legs. It disappoints by not mentioning where some of the more prominent cartouches are located (like those for Alexander the Great and Tutankhamen) and disregarding background on topics like the three excluded titulary names or how scholars identified some of the more puzzling logograms.

Overall, however, Sharp’s Cartouches is an extremely entertaining and useful book, one that should add delight to any trip to ancient sites.