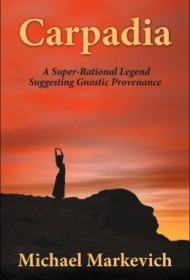 An allegorical exploration of modern day shamanism and the pathways to existential and spiritual transcendence, this fantastical story follows a handful of characters on their individual and collective mystic journeys of self-discovery.

Powered by a diverse amalgam of folklore and philosophy—from the Haida (indigenous people of the Pacific Northwest) to Carlos Castaneda to Carpathian gypsies to Ralph Waldo Emerson—the narrative begins in the Carpathian mountains where a group of gypsy boys endure a coming-of-age ritual that involves, among other things, gang-raping a she-wolf. After the life-changing experience, the boys—namely Misha and Dneipo —go their own ways into the world. A gypsy girl, Nadia, begins her journey by running into the forest and inexplicably leaving the “physical realm” on her quest to find a deeper understanding of her existence.

As the characters experience the world, they begin to understand that their energies,  vibrations, and essentialities are intertwined for a very specific purpose. During their collective journey though time and space, universal questions are raised, such as: “Was [their] destiny really anything more than solidified hydrocarbon manifestation, creating form and interacting in finite possibility across a unit of time?”  The story includes footnotes throughout.

Unfortunately, the author’s decision to include so many scholarly references was made at the expense of telling a solid story that both entertains as well as enlightens. Additionally, in several sequences, the  “New Age” jargon begins sounding like gibberish: “The resonance of their symbiotic human vibration was introducing a design and would create a synchronized option.”  The concentration of quotes from other books, references, and such jargon undeniably affects the power and impact of this story.

Grammatical errors are also an issue: There are hundreds of such errors, which—coupled with the aforementioned problems—make for a frustrating and disappointing reading experience.

Ultimately, the author presents an intriguing concept that falls well short of its potential.