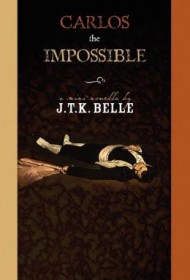 In this short but elegant novella, an aging matador from Mexico meets his greatest adversary in an infamous bull from the American heartland. Inspired by traditional folk tales, the author sets his story in an indeterminate time period, spinning a legend all his own with the compassion and verve of a born storyteller.

The novella begins by introducing the titular monolith of the book, a gargantuan bull from Kansas whose moniker quickly evolves from “Son of Carleton” to the ironic “Carlito,” to “Big Carl” and finally, to the ultimate compliment: “Carlos the Impossible.” By the time he’s been drafted for bullfighting and become known in Mexico, the bull has killed 23 men, while rumors say he’s “…as a big as a cathedral,” and “…tall as an elephant, with a hide twice as thick.” The bull quickly gains the attention of 35- year-old Hernando, one Mexico’s finest bullfighters, who believes he has been called to inspire this great beast to become a great fighter, only then “To die nobly at the hands of a true matador.”

But to Hernando’s surprise, Carlos gores and nearly kills him during their first match. He spares the bull’s life for a rematch–and then another, and another. Eventually, these two become as entwined as family members until, by the end, the papers have taken to calling it “The Spectacle Without End.”

Belle uses wonderfully spare but artfully descriptive language throughout to capture the pulse-pounding thrill of the ring, the romance of a sport from another age, and the unlikely symbiosis between man and beast. The uncommon ending is enthralling. “If your demons offered you a truce would you take it?” asks the author. “If your monsters put forward a middle ground would you meet them there?” Fascinating questions, with an inventive and emotional answer. This is a resonant and confidently penned fable with a heart as big as its heroes.