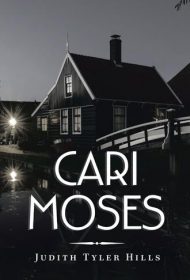 Cari Moses is an ambitious mystery novel about the search for a serial killer of pregnant women and the connections others have to the investigation.

While vacationing on the waterways in northern England, childless couple Ben and Karen discover an infant floating among a canal’s rushes. Against Ben’s wishes, Karen takes in the baby, naming her Cari Moses. Meanwhile, police officer Sandy risks her relationship with her romantic partner Helen, and later her career, by pursuing a lead regarding a young homeless woman hospitalized after an attack—a woman who shares a traumatic past with the killer. And Pam, a midwife at the clinic where Cari Moses was born, gradually realizes disturbing truths about her two teenage boys and her husband Ted, a senior police official.

Each chapter follows a different character, including the killer, giving readers a glimpse into their personalities. Despite the large cast, each figure is admirably distinct. The killer is frightening in his meticulous planning and gruesome staging of the bodies, and the author maintains suspense throughout, offering plenty of twists and turns and keeping the killer’s identity secret until near the end.

The novel also has a few flaws. Although Ben and Karen’s story is compelling on its own— as Ben, especially, lives in fear of authorities discovering that Cari isn’t their biological daughter as they have always claimed—its connections to the serial killer plot feel tenuous. There’s a sense that it should be its own, separate novel.

Additionally, a twist regarding the killer feels confusing and unnecessary, and the novel’s timeline seems inconsistent near the end, as many years pass for Cari and her family, while hardly any seem to go by for other characters.

Despite these drawbacks, the novel’s style makes for an easy read and the search for the truth is engaging, as is the peek into so many people’s messy, sometimes sinister, lives.