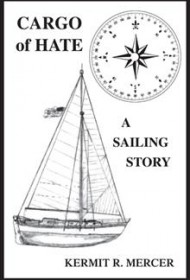 Although Cargo of Hate has a solid storyline and some stirring action, it is clear that the meat of this book does not lie in the thwarting of its terrorist plot, which the author describes thrillingly, nor in a romance, which the author allows to blossom gently. Rather this novel is a setting-forth, in knowledge and metaphor, of the lessons learned in a lifetime.

The author, Kermit R. Mercer, has more than 60 years of experience in sailing, and much of his book is about ship handling. It is clear that the author loves sailing and that he views a crewman’s ability to handle a ship well, to keep it trim and on course, as analogous to a person’s ability to head steady-on through life.

The novel’s main character, Allen Reed, is a teacher who spends his summers sailing Lake Ontario. The book opens with him preparing to take his “thirty-two-foot cutter, Sturdy,” out for its first sail of the season. Sturdy is “one of the last remaining traditional wooden boats in the area,” and Allen crews her single-handedly, accepting the risks and personal satisfaction of “taking a boat alone in ‘harm’s way.’”

During the course of the summer, Allen renews old friendships, pits his skill against fog and storm, rescues men from a capsized boat and gradually permits himself to recover from a divorce. The “cargo of hate” in the title is a shipload of explosives which Allen and a friend keep terrorists from detonating.

Throughout this action, the author quietly affirms traditional values such as courtesy, courage, and compassion. He also uses some beautiful language. Wooden boats, he says, “talk in the seas, telling the skipper of their feelings and their moods and complaints….” Although Mercer’s novel is marred occasionally by typos and run-on sentences, it is, on the whole, a gem well-worth reading.