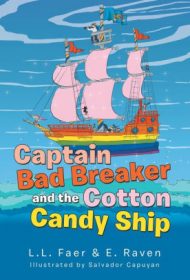 Captain Bad Breaker and the Cotton Candy Ship is an engaging seacoast adventure featuring a dastardly pirate-turned-innkeeper and the brave young captain who decides to put an end to his shenanigans.

Captain Bad Breaker, a pirate running an inn off the coast of Maine, “never met a woman, man, or child he could not cheat, fool, or trick.” But he soon finds his days of stealing from guests and causing general mayhem are numbered when a mysterious Cotton Candy Ship, led by the virtuous and charming Captain Elaine Mermain, docks in his harbor. Before long, Captain Elaine and her diverse crew (including her feline friend, Ginger) are beating Captain Bad Breaker and his skull sidekick, the Head of Doom, at their own tricks—and ushering in a new era at the Bad Breaker Inn.

The authors use humorous and inventive language that’s sure to draw in imaginative kids and parents. Captain Bad Breaker’s inn is “perched precariously on the craggy, big-rock-strewn shore of Maine’s blue sea coast.” No one dares challenge the evil pirate until Captain Elaine’s ship lands “on the beach that glassy sea and balmy sky day.” The colorful illustrations feature bright blues and greens that attract attention while also allowing the whimsical rainbow-colored Cotton Candy Ship to stand out.

A few issues detract, however. The pages are dense with text that will likely be daunting for early readers. And the ending delivers a puzzling mixed message. Learning that Captain Bad Breaker has drowned near book’s end, Captain Elaine “fell to her knees and pounded the sand. Even though he was a scoundrel, she did not want him to drown.” Captain Elaine’s despair is completely forgotten, however, in the celebratory text that follows, leaving her moral dilemma unexamined.

Nonetheless, with its focus on standing up for what’s right and putting oneself on the line for one’s friends, this story should appeal to families looking for original adventures featuring smart and relatable protagonists.