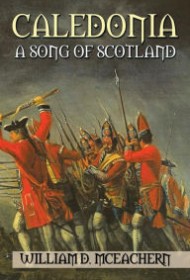 The 1745 Jacobite Rising in Scotland against the English sovereignty forms the basis for most of this historical novel, the first in an anticipated series.

Scotland’s place under the aegis of the United Kingdom has always been shaky, a frayed relationship that has withstood repeated attempts at secession, including one in the mid-18th century. The Union had bled the Scots dry, and the mostly Catholic Highlanders wanted to establish a ruler more favorable both to their purses and their faith. Bonnie Prince Charles seemed just the man for the job, but as this narrative shows, he lacked the resources to see the revolution through.

The initial portions of this sometimes entertaining but often confusing novel involve other aspects of early Scottish history. Only about halfway in does the story arrive at its raison d’etre: the Rising and subsequent defeat of the Scots at Culloden, among other related events.  The novel’s second half alternates between third- and first-person narrative as told by a member of the MacDonalds of Clanranald. Through this clansman, we get a clear-eyed view of the difficult battle the Scots had to wage with limited resources.

The alternating viewpoints are disorienting, however, and early on, a litany of places and characters with no direct bearing on later events weakens the narrative considerably. One example: “The Dalriadans were led by King Fergus, who migrated from Ulster to Kintyre and then moved to Argyll in may be [sic] the late 490’s [sic]. King Fergus Mor, that is the Great, was converted to Christianity by St. Patrick…” Who were all these people, and why should readers care? We never really find out. A tighter focus on the Rising, and a who’s-who of the principal players might have yielded a stronger narrative.

What finally emerges is a spirited ode to Scotland — you can taste the whiskey and smell the burning peat — but unless you’re a history aficionado, you just might get lost in the famous Scottish moors.