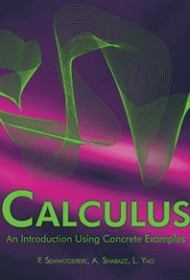 This book is intended to cover two semesters of Calculus and does so with the unorthodox method of introducing problems and or examples before defining the mathematical concepts.

The problems and examples are well chosen and are intended to show readers why a topic is important before actually studying the concept. The order of topics varies somewhat to that of a traditional textbook that covers this material. For example, antiderivatives are introduced in the first chapter of the book; more commonly, they are introduced much later in the first term. Also, the book doesn’t include a chapter on applications of the derivative before the introduction of integration. However, there is an appropriate chapter on applications of antiderivatives following the discussion of integration. The only apparent concept that is slighted, with no mention, is that of the calculus of parametric equations.

Among the interesting features of this book is the sequential numbering of all definitions, examples, theorems and certain exercises. This allows the authors to refer easily to each throughout the book. Another feature of note is the inclusion of a large number of exercises, many of which are solved in the appendix. Students will appreciate and rely on these worked exercises as they master the material covered.

The book is well written and the material easily readable. The authors’ approach of using concrete examples will appeal to many students, who are likely to prefer this method to a more theoretical style including proof, which is the case with most texts.

The book has evidently been used as a text for college courses and could also be used as a supplemental resource for those studying Calculus. The authors may also find a market niche for their approach in community colleges.