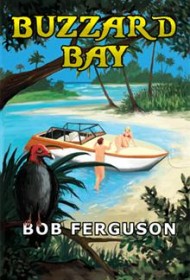 An entrepreneurial Canadian farmer gets swept up in international intrigue and pulpy escapades when he clashes with the Columbian mob in this sprawling, graphic thriller from author Bob Ferguson.

Buzzard Bay leapfrogs between 1969, the early 1980s, and 1997, when the majority of the action is set. Bob Green is a burly Canadian student in Minneapolis when he meets Judy Hanson, a winsome tomboy with whom he shares an electrifying attraction. The attractive couple raises two lovely children on a farm for many years.

Fast forward to 1997: we find Bob on the run from two assassins after a wintry assassination attempt straight out of the Bourne film franchise. To fill in the back story, Ferguson flashes us back to 1988, as the Green family is lured into a too-good-to-be-true farming scheme on Andros Island in the Bahamas, managed by a multi-million dollar nonprofit called APCO. Sure enough, the NGO turns out to be a front for the Columbian mafia, who are running cocaine out of the islands and are backed by a sickeningly sadistic German pimp named Grundman who is funneling funds through Switzerland. The whole operation is run by an overlord called El Presidente, who sets two vicious mercenaries named Henekie and Alf on Green’s tail.

For those who like their hombres manly and their female characters pliable, Buzzard Bay will be a familiar throwback to the heyday of men’s adventure novels.