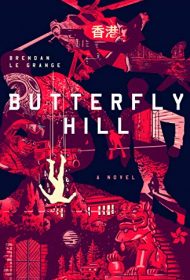 Butterfly Hill is a sequel to le Grange’s debut novel, Drachen. For newcomers, le Grange offers a brief synopsis to set the scene.

Here, Shimizu’s goal isn’t art exactly. He’s after a map, drawn and protected by an ancient Chinese order that supposedly leads to an artifact that would topple the Communist Chinese regime and re-establish the Song Dynasty. The map is illustrated with the 12 animals of the Chinese zodiac, which indicate clues to find in these locations.

The story is a thrill-a-minute, starting with Shimizu’s opening escape from Rossouw and his reconnecting with his father to plan a diamond heist. The heist is actually a ploy for Shimizu to view the legendary map and begin his treasure hunt, and his father is a pawn who’s sent to prison for his involvement. In this supremely dysfunctional family, Shimizu seems happy to double-cross his father and has even darker intentions for his mother, but his hatred is left unexplained.

Most of the narrative follows Shimizu and his pursuers on a harum-scarum journey across one of Hong Kong’s islands. Shimizu searches for carved jade clues etched with the zodiac animals, all while dodging bullets as he climbs up cliff faces, falls down mountainsides, and slides along muddy trails following the map.

The novel, a mashup of Indiana Jones and Tomb Raider adventures, is entertaining for its nonstop action, but readers are left wondering if the plotline is worth the payoff. Shimizu’s ultimate goal is to give the artifact to his mother so she’ll be killed for it. But that remains unresolved in this installment. A surprise ending sets up another sequel.

Many plot elements are unexplained here; one wonders if reading the first book would fill in the gaps. Still, the action is great fun and will sustain most readers.