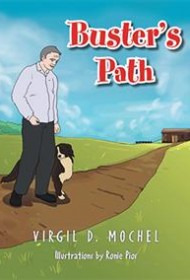 Even after a beloved pet dies, it can still leave a lasting mark on our lives. Buster’s Path is Virgil D. Mochel’s picture-book paean to his Australian shepherd, Buster. The “Path” of the title is both emotional and literal: Buster was so fond of running parallel to cars and trucks that the dog wore running paths through the farm where the author lives.

Mochel begins his narrative with details that would seem to interest mostly friends and family. He recalls his previous dog Ginger and the fact that Buster’s name was changed when he was adopted. This leaves general readers impatient for Mochel – and Buster – to cut to the chase.

As the book progresses, Mochel presents his reminiscences of Buster with an adult vocabulary and perspective. For example, he describes a gathering as “a very relaxed social event,” and writes, “…I think his vigorous exercise in the form of his racing must have been responsible for his long life.” In one passage, he writes of a cat Buster befriended who was “killed on the road by a car,” and notes that he buried the cat “on top of Buster, so now the two of them will be together through eternity.” Such information is likely to be upsetting to young readers.

Mochel notes that Buster lived to be 17, “which is 119 in people years.” He laments his pet’s passing: “Practically every morning when I step outside the house, I half expect to see him come bouncing toward me.”

Many will relate to such sentiments, but it’s uncertain who the appropriate audience would be for this book. With its adult vocabulary and viewpoint, it clearly misses the young children’s market. And while this story of a man’s steadfast love for his dog might move teen and adult dog lovers, it’s unlikely that these readers would pick up a picture book. As such, it seems that the book will have difficulty finding a niche.