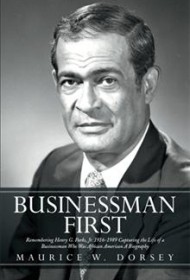 Mr. Dorsey is not a writer, but he promised his friend and mentor, Henry G. Parks, Jr. – who died of Parkinson’s Disease in 1989 – that he would make a written record of his achievements: Among them, Parks was founder in 1951 of Baltimore-based Parks Sausage Company, member of the Baltimore City Council from 1963-1969, and a shining example of “a businessman who is black” (worded this way because Parks never wanted to be called “a black businessman”).

In that aim, the author has succeeded. He gives a roughly chronological account of Parks’ life, plus 25 pages listing honors, awards, donated historic photographs and other memorabilia. The prose is inelegant, the organization iffy, but Dorsey’s vast knowledge of his collaborator-friend is solid, and his too-far-and-few-between anecdotes about the man 30 years his senior are rich.

Anyone who grew up on the East Coast knows the slogan, “More Parks Sausages, Mom! Please!” Parks did not advertise the fact that the company was “Negro-owned” and sold his scrapple, sausage and other meat products widely from Virginia to Massachusetts. He built bridges between white-owned companies and black businessmen, and took the first African-American-owned company in the country public in 1969.

Family members or historians are the likely audience for this work, rather than general readers. But the author, a gay man who blossomed with the affectionate father figure he met through their college fraternity, does offer one revealing insight: Even though Parks was married for 15 years and had two daughters before his wife divorced him, the love of his life was another married man. How his secret life drove Parks’ success is unfortunately not addressed.

Now that Dorsey has fulfilled his promise, perhaps there is another, more personal book to be written — about his fond, unlikely friendship with the accomplished businessman who was African American.