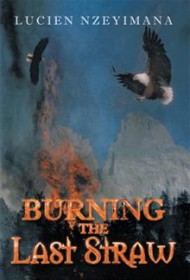 The preface of Burning the Last Straw notes that this novel is a “work of realistic fiction.” Although the geographical locations, clan names, individual characters, and dialogue are fictitious, it deals with factual events.

The story details centuries of corruption, cruelty, executions, and genocide in a country called Burunga, home to the Wundanna, Rungan, and Lord clans. Originally living harmoniously as three separate ethnic groups, the aggressive Lords use advanced military skills to steal land from the other two clans. This initiates many years of so-called ethnic cleansing, a widespread and ongoing attempt to exterminate a population through direct violence as well as less-direct means, such as starvation and demoralization.

The book describes various Rungan freedom-fighting heroes emerging through the years, as well as cruel Lords and promiscuous women. Abundant affairs, trysts, and rapes produce children of mixed and unknown heritage. Therefore, relatives often don’t know each other, and lines are blurred between clans. When genocide is the primary objective of the ruling class, family heritage becomes crucial to survival.

While the author is passionate about the subject and claims to have personally escaped “certain death twelve times” before seeking asylum in Tanzania, Burning the Last Straw suffers from several important flaws. The overlapping of fact and fiction proves confusing at times for readers not overly familiar with African history. In addition, the narrative repeats and over-explains important points and dialogue. Awkward phrasing also affects fluency. For example: “They believed that the region would be impeccable for their lives”; and, “I am already in her privates, and she is offering herself.”

Author Lucien Nzeyimana uses dozens of cliches and anachronisms (often simultaneously). Overly familiar and/or inappropriate phrases include: “Let’s call it a day”; “They were pissed off”; “Okay, boys, here is the deal”; and, “You should try Tylenol.”

Such flaws severely hamper reading enjoyment. Those deeply interested in Africa and African history would be the primary audience for this book.