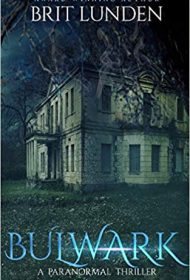 Town sheriff Clay Finnes is mourning the loss of his young child and the end of his marriage to Jenna. As he tries to figure out how he can get Jenna back, his biggest nuisance is a local journalist who attempts to meddle where she shouldn’t. Still, things for Clay are mostly ordinary until he’s called to the scene of an accident. The fatally wounded passenger’s recounting of events is rambling and nonsensical. Meanwhile, her obviously injured and shaken husband can barely speak and sheds no light on the matter.

If the Brothers Grimm and Stephen King had co-authored a novella, Bulwark would be the result. Lunden’s story is a modern, paranormal take on the classic Hansel and Gretel. If you like to sleep with the light on after having the wits scared out of you, Bulwark is the perfect read.

Lunden writes compelling characters facing both inner and outer demons. Readers will root for Clay to solve the mystery just as hard as they’ll root for him to win back the love of his life. The author’s plotting is skilled, and the twists and turns keep coming until the second ending, which Lunden provides as an alternate conclusion. Unfortunately, the second ending is rather predictable. Part of the fun of good paranormal horror is not being able to see what’s coming. The first ending is the surprising — and most effective—one; the second seems unnecessary.

This misstep is easy enough to overlook, however. Disappointing second endings aside, Bulwark is a quick, thrilling story that will keep readers up after dark.