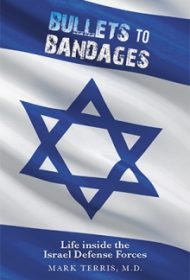 As an 18-year-old Israeli in 1977, Mark Terris was conscripted in the Israel Defense Forces (IDF). He somewhat reluctantly faced three years of military service, first in basic training as a paratrooper and later transferring to the medical corps, where he served until his 1980 discharge. Bullets to Bandages recounts this time in Terris’ life.

An excellent storyteller, Terris leads readers through his ordeal, which included exhausting physical and mental challenges, bad food, isolation, and, perhaps above all, coping with a frustrating military mindset.  Early on, he introduces readers to three fellow soldiers, and via their experiences we get an informative, well-written account of life in the IDF.

In less skilled hands, this could be tedious territory. But Terris makes seemingly mundane things—a dining hall description, a lesson on how to light a cigarette—interesting. Even a task as basic as shining one’s boots is explained meticulously:

“It was not sufficient to simply apply some polish and then buff the boots to a shine. The ritualized procedure included cleaning the boot or shoe of all mud, conditioning the leather with a thin application of gun oil, applying shoe polish that had been premoistened with a gentle mist of saliva (hence the term ‘spit polish’), buffing, applying a thin layer of shoe wax that had also been moistened with saliva…”  As Terris writes, “the shoeshine was king.”

He also frequently finds humor in military madness, when 10-men road-sweeping details, middle-of-the-night drills and endless marching are the norm because, well, because some commanding officer says so. “I hate the conniving bastard at the main absorption camp who sent me to this screwed-up (assignment),” laments Otto, one of his buddies. “…And another thing— I hate green. I hate green uniforms.”

Anyone who has served in the military or is interested in the IDF will enjoy Terris’ tales. But those who never served will also find Bullets to Bandages an informative and entertaining book, well worth their time.