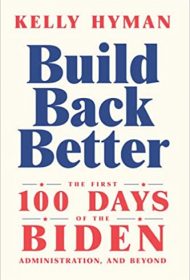 Following the 2020 election, President Joe Biden called on Americans to “turn down the temperature,” his attempt to regulate the overheated political rhetoric of recent years in search of unity and bipartisanship. In this spirit of conciliation, actor turned Democratic strategist Kelly Hyman reviews Biden’s first 100 days in office in her book Build Back Better.

“At the end of the day,” writes Hyman, Biden’s ‘Build Back Better’ agenda has to be about ordinary people’s lives, not the noise politicians make.”

In most cases, she emphasizes Biden’s moderation. For example, she points out that Biden favors expanding the Affordable Care Act while opposing Medicare-for-all proposals from those to his political left. She notes that while Biden’s agenda on the environment is ambitious, he doesn’t support the “extremes” of the Green New Deal. Hyman ends her book with a section detailing the executive actions the president has signed day-by-day up to Day 84 of his term.

Well documented and clearly written in an honest, forthright voice, Hyman’s book is a voice of reason. Its weakness is not in the execution but in its concept. A progressive voice on conservative outlets such as Fox News, Hyman apparently assumes that there’s an audience among those who did not vote for Biden who are willing to give him a fair hearing and judge him on the issues. She focuses on issues and policies rather than people and personalities, and seems to assume that rationality and political pragmatism have a future.

Time will tell if her assumption is correct. In the meantime, one can only hope that her analysis won’t fall on deaf ears.