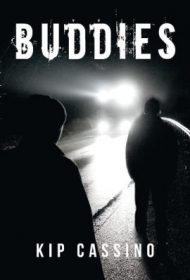 Kip Cassino’s new thriller, like his previous offering, The Narrow Man, follows a law enforcement team on the trail of a PTSD-afflicted killer.

The Captain and Pauley, veterans of the wars in Afghanistan and Iraq, are friends who share a fraternal bond. Damaged by their battlefield experiences, the two pursue a nomadic existence, with the Captain acting as caretaker for lower-functioning Pauley.

Their trauma is not the only thing that keeps them moving: Wherever the pair turns up, a murder occurs. When local authorities notice the latest killing is part of a wider pattern, they call in the FBI, launching a nationwide manhunt that soon targets the pair—even as the Captain makes one last attempt to turn his and his best friend’s lives around.

Buddies mines similar emotional territory to The Narrow Man, but not quite as effectively. The law enforcement characters could use more careful development; for instance, a romance between two of the investigators feels arbitrary rather than an organic development between the characters. Additionally, the descriptions of Captain’s and Pauley’s ordeals have a generic feel, as in: “[Pauley] saw lights. He saw faces in front of him…Sometimes he thought he heard people speaking, but they seemed far away.”

By contrast, Cassino’s portrayal of the two men’s vagabond life is haunting, in the tradition of classic American road novels and films. He artfully describes desolate backdrops against which the men travel, referring to Tucson as “an eye-level city, with few tall buildings,” for example, and to “the paved monstrosity of Phoenix.” The main characters’ friendship is also beautifully rendered, their mutual devotion reminiscent, with a gory twist, of George and Lennie from Of Mice and Men.

Despite its flaws, Buddies has much to recommend it. With some revision, it could appeal to a wide crossover audience of both crime and literary fiction readers.