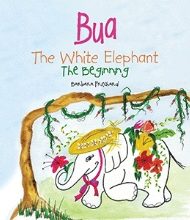 In Barbara Pritchard’s debut children’s picture book, the parents of a rare white elephant are afraid she will be given to the king because of her unique skin color.

Rose and Winfield, two elephants who live in the jungles of Thailand, are the proud parents of a baby girl elephant. Their “mahout” (a human caregiver to elephants) is Lat, a man who loves the baby and names her “Bua,” which he explains refers to the “beautiful and fragrant” lotus flower.

To protect Bua’s sensitive skin, Lat makes her a hat, which she adorns with flowers. She so loves to dress up that she becomes completely festooned in flowers, and though the elephants in her class laugh at her appearance, she doesn’t care.

Soon, her parents and Lat realize she’s a rare white elephant, and, as is customary, would eventually be given as a gift to the Tai king. The three are heartbroken at the prospect of losing her, but the story ends on a happy note after a compromise is made.

The tale has a sweet nature, and the author’s colorful illustrations convey much charm. Children will enjoy coloring a detailed black and white picture of Bua at the end of the story.

Unfortunately, the plot contains confusing elements. Bua’s classmates tease her due to her flowery adornment, but they somehow ignore her unusual skin color. This could be explained by the narrator’s later comment that Bua’s skin color was a “secret,” but the pictures clearly illustrate Bua as white compared to the others. It’s also unclear how the king’s men know there’s a white elephant in the herd if it was a well-kept secret.

Additionally, while this is Bua’s story, the tale never explores Bua’s emotions, and the crisis is so easily resolved that the tale lacks tension.

Pritchard’s story has the potential to introduce children to an unfamiliar world through Bua, but such issues need attention before it can reach a wide audience.