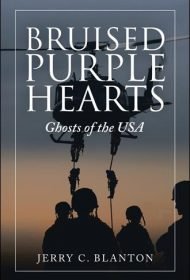 Jerry C. Blanton’s historical novel immerses readers in a time that’s fading into the fog of history: the turbulent ‘60s and ‘70s. As seen through the eyes of draft-age Matt Conklin, Bruised Purple Hearts: Ghosts of the USA is a skillful depiction of the days of sex, drugs and rock-n-roll, when the fight for racial and gender equality and against the Vietnam War was capsizing the status quo.

Unlike many other counter-culture narratives told through the eyes generals and politicians, grunt soldiers and draft dodgers, this story describes how most young men navigated the era. Like Conklin, they opposed the war, but instead of fleeing to Canada or facing prison as conscientious objectors, they avoided the draft by working the Selective Service’s system of deferments.

For Conklin, that means attending college, and when school deferments run out, turning to marriage and teaching deferments. The narrative follows Conklin through indecision, failed marriages, difficult and low-paying jobs in poor rural schools, bouts of drug use, friends’ deaths, and constant self-doubts. He also experiences what seems to be apparitions of deceased friends and high-profile leaders, such as Martin Luther King, who occasionally offer advice. His alter-ego is his twin-brother, who voluntarily goes to war and emerges wounded and opposed to war.

Some baby boomers will see themselves in Conklin, having faced difficult practical and moral decisions. Others might see shades of Jack Kerouac, the Beat Generation author who, like this story’s protagonist, delved into drugs, promiscuity, spirituality and travel. Unlike Kerouac’s stream of consciousness style, however, Blanton’s writing is focused, crisp and economical, opening a door into Conklin’s innermost, troubled mind.

Boomers who can bear returning to those turbulent times will find the story truthful and perhaps troubling. Younger readers will find an important history lesson: what it was like when a faceless authority could completely upend your life, order you into combat and perhaps to your death. In this, Conklin is neither hero nor villain, but everyman.