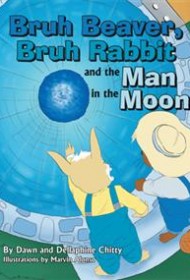 This picture book version of a popular Bruh Rabbit story will entertain young readers with a sticky situation and clever escape.

As the story opens, Bruh Beaver labors in his garden. Bruh Rabbit decides to steal dinner from Bruh Beaver rather than grow his own. Caught in the act, Bruh Rabbit offers to show Beaver to a giant wheel of delicious cheese.

He takes him to a deep well that reflects the full moon. “There is the cheese Bruh Beaver,” Bruh Rabbit says. “You can go down and get all the cheese you want.” When Bruh Beaver balks at this idea, Rabbit lowers himself down in a bucket while devising a new plan: He tells Beaver there’s too much cheese for him to bring up himself, then invites Beaver to jump into the other bucket and join him in the well. As Beaver does so, the pulley connecting the buckets sends Rabbit back to the mouth of the well, allowing his escape.

Bruh Rabbit is a classic trickster, and this story certainly shows off the character’s cleverness. But the book ends rather suddenly, with Rabbit’s escape, so his lack of humility or remorse are never in doubt. Parents unfamiliar with this folktale should be aware that Bruh Rabbit’s moral compass isn’t the most exemplary.

The book would also have benefited from a thorough copyedit, as punctuation and grammatical mistakes (“Bruh Beaver had him a nice piece of land.”) can be distracting, and unformatted sections of dialogue often cause confusion about who is speaking.

While this story will be familiar to fans of trickster tales, readers won’t find new perspectives or nuances in this version. Amusing but unpolished, the book would have benefitted from closer attention to technical details and a less abrupt conclusion.