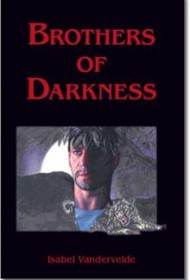 Isabel Vandervelde’s Brothers of Darkness is an aptly named collection of short stories and a novella that delve into the darkest corners of the human psyche. Often featuring elements of the paranormal, violence is a common theme.

“Birthmarks” tells the tale of a new girl in town, tempted by a wrong-side-of-the-tracks charmer and at the crossroads of her own future. Will she reach for a better life than those around her or give in to the poverty and dysfunction at hand? In “Coyote,” a Vietnam vet battles the bottle and is about to surrender to his demons when he hears the call of a coyote, the “trickster” in Native American lore.

“Family Business” is a light-hearted story of a sheriff bent on solving a cold case involving the father of a family of criminals — only to find himself falling in love with the man’s daughter. The final tale is the novella “Star Quality,” a dark fantasy centered on an actor who is also a serial killer.

Vandervelde wrote these stories over a period of 43 years, and her experience with the craft is evident in her quality of writing and understanding of fiction technique. At their best, the stories are well developed, with a keen eye for detail and setting.

But at times characters lean toward the stereotypical, the plots feel weak or contrived and the violence seems over the top. (In “Remember Me,” for example, a man seeks revenge against the aunt who abused him in childhood and killed his father: “And then he would step closer,” he imagines, “putting the first bullet in her throat so she would not scream, and then he would stand over her and watch her drowning in her own blood, gurgling and gobbling with pain and horror.”) Too often the author gives into the easy outcome, betraying her own skills and leaving the reader unsatisfied.