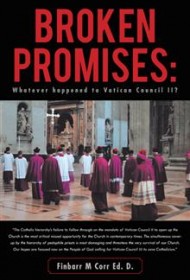 Born and educated in Ireland, Finbarr M. Corr was 26 and newly ordained when he arrived at his first parish in New Jersey in 1960. Vatican II was soon to begin. The Catholic Church he was raised in was about to change dramatically.

His book tells the story of the Vatican II changes he lived through as an American parish priest. It also highlights the Irish experience, in which a once-unquestioning Catholic population has been traumatized by the recent revelations of extensive child abuse and cover-up by church leaders. Corr looks back at his years in Catholic boarding school, the abuse he observed there, and his youthful silence.

Corr feels strongly that the reforms of the Council have been left unfinished. He argues that the abuse scandals around the world are a result of closed and secretive church leadership, a style of management that should have been reformed by implementation of the teachings of Vatican II.

He profiles Pope John XXIII, the great leader of reform who convened the 1962-65 Council but died soon after the Council began to meet. He also compares the leadership of the four popes since Vatican II and describes the forces at work in the thwarted church reform movements in the Netherlands, Belgium, Australia and Germany.

Professionally written in a straight-forward and honest voice and carefully edited, this is a book for general readers interested in a coherent recounting of the major themes of Vatican II, the countries and leaders who tried to move ahead with reform, and the opposition they encountered. Including lively anecdotes that illustrate the author’s points, Broken Promises is a passionate summary of the church reform movement and a blueprint for the future work that remains.