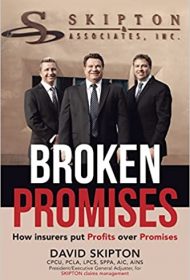 Consumers tend to remain loyal to companies that have kept their promises and earned their trust. Unfortunately, writes David Skipton, most insurance companies have broken those promises with their hell-bent mission to profit at all costs.

The author unfolds this cautionary tale, starting with the evolution of Allstate Insurance, which was part of Sears and Roebuck, the all-purpose department store. In the early 1990s, Allstate separated from Sears and hired the international business consulting firm McKinsey & Company to transform Allstate from a customer-centric to profit-centric focus. Skipton argues that this move was seismic in its far-reaching effect on other insurance company business models. The traditional fiduciary customer relationship was severed once its allegiance to attractive shareholder returns became its paramount objective.

This sundering has left consumers vulnerable to predatory practices and ushered in the era of intermediaries—public claims adjusters—who act as their claim advocates. For much of the remainder of his book, Skipton discusses how these adjustors can make consumers lives more tolerable when they file claims for such catastrophic events as fire and water damage. He details what to look for in a reputable public claims adjuster, including how to assess their credentials and questions to ask to determine a good match.

As president of Skipton Claims Management and an Executive General Adjuster, it’s fair to assume that Skipton has a vested interest in his book’s premise. Still, it’s likely that legions of readers have at least one horror story to tell of insurance claims that were underpaid or not paid at all. Additionally, the author notes that not all insurance companies have abandoned their fiduciary responsibilities to their customers, just enough to warrant the need for these professionals.

Skipton’s book, written in a clear and concise manner, provides a valuable resource for those who want to learn more about how the insurance profit model works or who seek to proactively arm themselves for dealing with their next claim-from-hell.