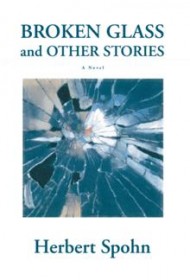 In this collection, Herbert Spohn draws on his experience of becoming an American after fleeing Nazi Germany as a boy, his observational skills honed as a mental health professional, and a deft hand for writing to deliver a short story anthology that is both assured and engrossing. While the 12 pieces that comprise Broken Glass and Other Stories can each stand alone, taken together, they make up a particularly satisfying volume.

Spohn’s stories generally move from specific observations to larger understanding and sometimes deliver moments of epiphany. A case in point is the title story, “Broken Glass,” in which a psychiatrist who senses that there is something sensible about a homeless man’s shard collecting dares to accompany the vagrant to a subway-tunnel hideaway. There, he finds that his witnessing of the man’s work is an act that gives the troubled man’s life some real meaning.

Finding meaning in human behavior also underlies the action in the rest of the book. For instance, in “Diary of a Blind Man,” a man must understand why he is sightless when doctors say he may be physically capable of seeing. Other stories examine the experience of fighting in a war against citizens of one’s own birth nation, coming to terms with workaholism, and more. A particularly clever short-short story is written in the form of a clinical report about “hyperempathy,” a state in which a person experiences overwhelming awareness of the emotions of others.

Arranged in an order that displays a range of mood and with smart, engaging dialogue, the stories amount to much more than the sum of their parts. With the exception of “Drunks” – which has a conclusion that “tells” rather than deftly “shows” the story’s mission – this is an accomplished anthology from start to finish.