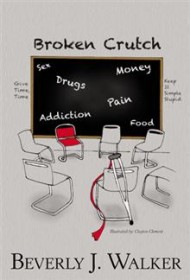 Broken Crutch introduces us to several characters, each battling an addiction. The plot then brings them together as they end up in the same rehab facility.

Tank is just 12 years old and already the man in his crowded household; his mother’s drug use has wrecked their family, and Tank begins making deliveries for her dealer in an attempt to put the dealer out of business for good.

Kodjoe Jackson gets hooked on cocaine as a way to alleviate his grief over the death of his wife, and almost loses a second chance at love as a result.

Mercedes has been running drugs for a local kingpin to finance a lavish lifestyle for herself and her daughter. When she gets on the wrong side of her boss, she loses everything and has to fight for a fresh start.

Author Beverly Walker has created a complex plot and vivid characters. Tank’s mother Cora May, for instance, is a nasty piece of work, and the elaborate plan Tank sets in motion to eliminate her dealer and try to get his mom back is keenly written. However, the book suffers from numerous grammatical and spelling errors, which make reading choppy at best (for example, the author writes on the back cover that Cora May “vowels” to never give up drugs), and much of the dialogue is written in dialect that is used inconsistently.

There are also a few sections that strain credulity: A woman coming out of a coma immediately starts back-talking hospital staff and packing up to leave, and an overweight man gets stuck while climbing out a window and dies. These events move the plot along, but leave readers feeling as if the action has been manipulated simply to serve the plot.

Broken Crutch offers several engaging story threads and could be an inspiring novel about addiction and recovery, but it requires a thorough editing for both content and context to connect meaningfully with readers.