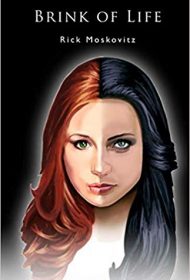 Rick Moskovitz’s Brink of Life is the second in a fascinating science fiction trilogy about a futuristic society where minds can be swapped to different bodies.

The story begins where A Stand-in for Dying ends. In 2059, a female consciousness awakens inside a different body, attending the funeral of that person’s husband. Standing over the coffin, the consciousness quickly assumes the grieving widow role, although she doesn’t know the man inside. After being driven home to a mansion, she uses the home’s highly advanced technology (including artificial intelligence and a holographic device) to learn more of her new identity.

Later, she continues an affair with the extra-marital lover of the woman who previously owned the body. But when police arrive to arrest the two for the husband’s murder, it becomes imperative she discover her true identity.

The woman also experiences flashbacks to a past female lover, and wonders if her sexual preference is determined by body, mind, or both. More importantly, as her memory returns, she must choose between two warring factions, both of which routinely murder to pursue their goals. She eventually decides to launch an extremely risky attack to accomplish what she believes is right.

As in the first book, intriguing issues of identity, immortality, morality, and ecology are considered. Plot twists and shifting identities keep things interesting as readers are constantly kept off balance.

Brink of Life is an exciting page-turner until the final five chapters, which feel rushed and omit important information. For example, the book notes that “Gaining entry to the most secretive organization within the Commonwealth’s intelligence network would be a formidable challenge” for the woman. Yet few details are provided about how she raids the organization, identifies a missing consciousness crucial to the attack, and establishes a new life afterward.

This is a disappointment. Still, Brink of Life succeeds in furthering the series through one character’s experience and, despite the abrupt conclusion, manages to deliver an intriguing stand-alone story.