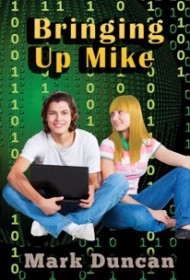 Joe, who lost his parents years earlier, is 17 and working in Utah for a classified section of the government. He’s advancing a technology he helped create called “personal assistants.” Enter Joe’s assistant, Mike — a computer capable of asking questions, conversing and learning. After Joe’s director suspends him for an “attitude problem,” Joe decides—following an online chat with advice-giving Amy (who he learns via Facebook is a teenager named Sue)—to travel to Shelbyville, Tennessee, where Amy/Sue resides and to finish high school and continue his research.

There, Joe is taken in by locals George and Martha. Soon, he notices an abused stallion on some property and starts bringing him carrots. When Sly, the stallion’s owner, catches him, Sly makes a deal that he never expects to work: If Joe can find a way to get the anxious stallion home, he can have him for $4,000 — far less than the horse’s actual value. Joe accepts and eventually brings the stallion home, making Sly his enemy.

Throughout the novel, Joe transforms from a socially challenged, overweight nerd into an affable, fit young man. He develops a friendship with Amy/Sue, and at Joe’s every step, Mike is listening and learning.

Duncan does a fine job chronicling Joe’s changes, giving him a satisfying arc. The plots entwine nicely, are brought to fulfilling ends, and every character is well developed, with the exception of cartoonish villain Sly.

Unfortunately, one aspect seriously drags down the novel’s appeal: the many dry conversations about science, politics, youth rights and more. For example, Joe, George and Mike have a long conversation about slavery that feels like a history lesson and does nothing to further the story.

Duncan’s novel is carefully crafted, but the very scientific nature of Joe’s work, coupled with these superfluous conversations, is likely to deter most young adult readers, despite the story’s many strengths.